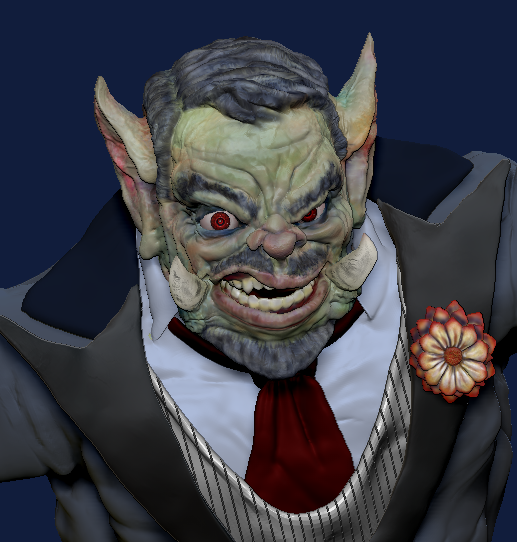 At the time, was playing a lot of warcraft.  Was working on an Orc, decided to make it my Avatar for that year.

Was originally going to be another shirt / poster design “zug zug Baby”, with the Orc looking over a dark pair of glasses that were being lowered a bit.  May still do that.

At this point, didn’t have a real handle on how to produce cartoon “eyes”.  Those I would redo.

Also, thin objects (glasses), and coming up with Shaded lenses were something I couldn’t tackle.

May come back and revisit it.

Also, if you look at Warcraft Orc’s, they actually have their “tusks” in their mouth.  Physiologically, didn’t really see that working all that well.  So “changed” them to be outside of the mouth.  Not ideal, but I thought at least he could close his mouth and chew on things and stuff.

Final bit, one of my first iterations in using masking and extractions.  This gave me extreme fits, as I didn’t realize that the masks stuck around even after you did the extract.  So, wound up with some pretty ugly stacking of materials, normals pointing the wrong way, conflicting surfaces.

Not a recommended way to learn the limits of things.

For an early effort, didn’t turn out that bad.  Did want to put a top hat on it as well, but again, for the time, would up being beyond my skill levels.